10th Gen Comet Lake-S is splashing down on embedded PCs

Vecow’s Linux-ready ECX-2000 Series offer up to 10-core Comet Lake-S CPUs with 6x GbE with PoE and optional 2.5GbE and 10GbE. Below, we take a closer look at Comet Lake-S and sum up the latest news on Intel’s Ice, Rocket, Tiger, and Alder Lake.

Vecow announced one of the first embedded industrial computers based on Intel’s 10th Gen Comet Lake platform. The rugged, fanless ECX-2000 Series supports the newly released Comet Lake-S Xeon and Core models with up to 95W TDPs along with a new Intel W480E chipset.

Intel has launched dozens of Comet Lake-S Xeon, Core, Pentium, and Celeron processors that follow an earlier round of embedded, 15W TDP Comet Lake-U CPUs. These included the first hexa-core U-series model: the 6-core, 12-threaded Core i7-10710U clocked at 1.1GHz or up to 4.7GHz in 1C Turbo mode.

Despite the 10th Gen title, Comet Lake should probably be named Coffee Lake Refresh Part Two, as it continues to use a 14nm process and ye olde Skylake microarchitecture. Nevertheless, Comet Lake-S has made some improvements to power efficiency, thermal packaging, cache, and performance, including overclocking enhancements. Comet Lake-S also includes the first Core processors with 10-core Core-i9 models. In addition, hyperthreading is available on all the parts, including the lowliest Core i3. 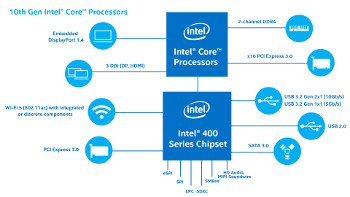 The Comet Lake-S performance leader is the 10-core, 20-thread Core i9-10900K, which offers up to 5.3GHz Turbo performance on two of its cores. The highest-end option on Vecow’s ECX-2000 is not far behind: The 10-core, 20-thread Core i9-10900E is clocked at 2.8GHz/4.7GHz and has a 20MB cache and a 65W TDP. That also happens to be the model that Intel uses in a somewhat mismatched comparison: The i9-10900E has “up to 31% better integer multi-tasking compute intensive application performance” compared to 9th Gen Core i7-9700 processors, claims the company. Unlike many of the Core processors and all the Xeon models, the i9-10900E lacks Intel vPro support.

As noted by Tom’s Hardware’s in-depth post on Comet Lake-S, the big news is lower pricing, the better to compete with AMD, which is posing unprecedented competition with Intel with its cheaper Ryzen 3000 and emerging 4000 series. “Intel has reduced its gen-on-gen Core i9 pricing by 20% per core, and up to 50% per thread on other models,” says the story.

Earlier this year, AMD launched a Ryzen 4000-U series and 45W H-series. The highest-end Ryzen 7 4800U is an octa-core, 16-thread model clocked to 1.8GHz/4.2GHz. Earlier this month, it followed up with a Ryzen Pro 4000 series with similar 7nm fabrication, 15W TDP, and core/clock configurations, but with additional AMD PRO enterprise security features similar to Intel VPro.

While the U-series will likely be the Ryzen 4000 models we will see in embedded systems, Intel is more concerned about AMD’s higher-end Ryzen 4000 desktop models due to arrive in the fall. The desktop Ryzen 4000 advanced to a next-gen Zen 3 core and are likely to have a 15-20 percent higher IPC (instructions per clock) performance than equivalent Ryzen 3000 chips.

Intel uses the same 10th Gen label for its 10nm Ice Lake family of chips based on a new Sunny Cove architecture. Ice Lake is now shipping in dual- and quad-core, double-threaded models with 9W to 15W TDPs.

An 11th Gen Rocket Lake design expected to arrive as early as the end of the year. Rocket Lake stays with 14nm fabrication and uses the same socket as Comet Lake. However, it is also rumored to offer a backport of a next-gen Willow Cove architecture that shares some features with Sunny Cove. Others speculate Rocket Lake will offer 10nm graphics and possibly even PCIe 4.0 support, which will be available on the desktop Ryzen 4000 models.

The full Willow Cove microarchitecture is intended to launch in 2021 with the 10nm Tiger Lake-U, which is rumored to be arrive as soon as the end of the year. This power-efficient, quad-core follow-on to Ice Lake is speculated to offer faster performance.

Finally, there is a 12th Gen, 10nm Alder Lake CPU family due next year that is rumored to be moving from the LGA 1200 socket used on Comet Lake — and presumably Rocket Lake — and an LGA 1700 socket. The high-end Alder Lake is also rumored to offer PCIe 4.0 support, as well as a version of Arm’s Big.Little heterogeneous core orchestration technology. Some suggest it could even provide DDR5 support.

Four major models are available, all of which are equipped with 6x Gigabit Ethernet ports, 4x of which provide PoE+. The 802.3at compliant PoE+ ports supply 25.5W/48V power.

In addition to these major SKUs there are also some specialty configurations, such as models limited to 2x or 4x GbE with no PoE+. There is also a 6F model for high-TPU 80W and 95W Comet Lake-S parts that has 4x GbE with no PoE+, but with 2x SFP ports. All the models are offered in two SKUs: one with dual SATA trays and the other with none.

Storage features include a microSD slot and 2x optional, front-access SATA III trays with support for 2.5-inch HDDs and SSDs with RAID 0,1 support. There are also dual mini-PCIe-based mSATA sockets and a storage-ready M.2 M-key 2280 socket with PCIe x4 support and optional SSDs.

For wireless and other peripheral expansion, there is a general-purpose mini-PCIe slot, which also supports mSATA, as well as M.2 B-key 3042/3052 and M.2 E-key 2230 sockets. Optional WiFi/BT, 4G, and 5G modules are available with antennas. A nano-SIM slot is built into a front-facing latch along with the microSD slot, enabling easy internal access via the top cover. Like the Coffee Lake based Vecow systems mentioned above, the ECX-2000 computers offer optional SUMIT A and B slots for stackable I/O expansion. 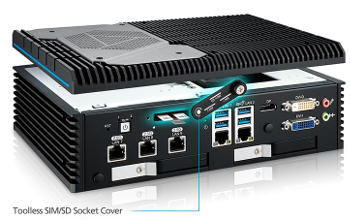 For 30W TDPs, the operating range is -40 to 75°C while higher TDP configurations can run at -40 to 55°C. The 80W and above configurations require a fan sink, and the ECX-2071 with dual 10GbE ports ships with a fan. Other ruggedization features include IEC 60068-2-27 compliant, 50G shock and IEC 60068-2-64-compliant, 5Grms vibration resistance. EMC and humidity protections are also available.

The ECX-2000 Series provides a 9-50VDC terminal block input along with a remote power terminal block and optional adapters. You also get 80V surge protection and 16-mode software ignition power control. Wall mounting is standard and DIN-rail, VESA, and rackmounting are optional.

No pricing or availability information was provided for the Vecow ECX-2000 Series. More information may be found in Vecow’s announcement and the product pages for the ECX-2000-PoE, ECX-2025, ECX-2055, and ECX-2071.

Online Predators’ Reports on the Rise. How to keep your children safe.